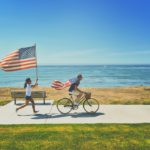 Being a melting pot of numerous different cultures, America has naturally plenty to offer to almost any tourist. No matter if you like discovering historical sites and architectural wonders, or if you are the type of person who likes to explore new night clubs and urban life of a place – America will give you what you are looking for. From the energetic New York to sunny beaches of Los Angeles, America is the promised land, waiting to be seen.

Located in the northern Arizona 277 miles long and with a depth of over 1 mile is the Grand Canyon, one of the most spectacular tourist attraction on the American soil. The magnificent canyon was made due to a process that lasted several million years, so one can say that it is something worth seeing. The Colorado River made a lasting mark on this area, making it one of the most picturesque sites in the entire world.

If you ever wondered what the world’s first national park looks like, then you should definitely visit Yellowstone.

In 1872 Yellowstone was proclaimed as a national park in order to preserve a great number of geysers and hot springs, as well as the incredible wildlife that forms an important part of this area. With over 10,000 hot springs and geysers it is a place where tourists will witness something so unbelievable that it may seem like a sci-fi movie. Visit Mammoth Hot Springs or take a boat ride on the Yellowstone Lake. No matter which way you take, you are bound to see something breathtaking.

Anyone who is visiting the North American continent, or a US citizen who is making their way towards New York, should put Niagara Falls on their “to go” list. The Niagara Falls is made out of three different waterfalls – Horseshoe Falls, Bridal Veil Falls, and the American Falls. Due to its proximity to the Canadian border one of them, Horseshoe Falls, is on Canadian territory. Visit Cave of the Winds or Maid of the Mist for a complete Niagara Falls experience.

For those tourists who are looking for a night to remember, Las Vegas is the place to go. Located in the middle of the southern Nevada desert, Las Vegas gives the first impression of a hidden jewel. With all of its bright lines and music coming from all around, it invites all newcomers to relax and unwind at every corner. With more mega-casino hotels than one can count, it really is a must-see for every thrill-seeker in the world.

It is no wonder that traveling families usually wind up in Orlando, Florida when this city boasts one of the greatest and most charming amusement parks in the world. But it doesn’t attract only families. Adults also find so many different things to do that they decide one day is simply not enough. In fact, there are several different amusement parks like Hollywood Studios, Magic Kingdom, Epcot, Animal Kingdom, and the Blizzard Beach Water Park that merge into one great Walt Disney World. Everything from exciting rides to restaurants and live shows awaits visitors year-round.